DW is THE example of a successful social media brand. Filip Tysander started the company in 2011. Only 6 years later, in 2017, DW was named the fastest growing company in Europe. A big part of this growth is explained by social media. DW has a strong digital strategy and has a reach of 3 million people on their Instagram profile. Nowadays, DW is using social media stars in their advertisement campaigns, like Lucky Blue Smith and Kendall Jenner.

The Swedish brand is now opening stores all across Europe. And Brussels was definitely on their list. You’ll find the store in the Rue du Marché aux Herbes, in the historical center of the city. ‘So what about Antwerp?’ was my question to the Head Marketing Manager of DW. Well, they confirmed to know Antwerp is the Capital of Fashion in Belgium. If there would be a second DW store in Belgium, Antwerp is the next in line.

You’ll find my favorite watch here & will see it probable appear in a next blogpost.

Photos by Matthias Geerts & Me 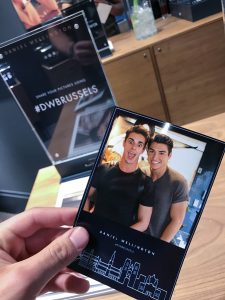 END_OF_DOCUMENT_TOKEN_TO_BE_REPLACED

How to Develop a …