Hi guys, I know it has been a while since I’ve written a new blogpost, but I had some exams to take! The last one was today, so my social life is back! Nevertheless, it didn’t stop me from going to Paris for one day to check out some shows with my best friend.

Our first stop was a restaurant, near the Arc de Triomph, that served us one of the best brunches we ever had. We met with one of my friends I know from Mexico. She lives in Paris and took us to this cool place. After being stuffed with some ‘pain au chocolat’ and other French stuff we were able to conquer the City of Lights!

Our second stop was the show of Rynshu, which was near to the 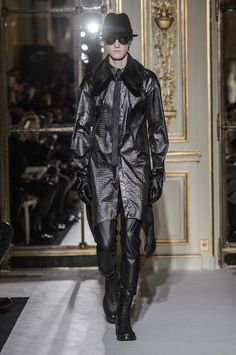 Louvre. Rynhsu is a Japanese brand which has been running its shows in Paris since 2010. Their main creations have a dark, modern and futuristic edge. This year they showed a combination of classic and modern menswear essentials. We saw long bomber jackets as well as shirts, blazers and long coats. Next to black, the main colors in the collection were red, silver and white. Most of the shirts were made from light fabrics (satin-like) and finished with some Japanese details on the back. These garments were for sure some of the eye-catchers. They made red one of the outstanding colors of this collection, by using red roses as a pattern which came back in several blazers and shirts.

Another clothing piece which had an important role in the Rynshu collections were boots. Except for some converse-like examples, every model was wearing boots. Details on these shoes were varying between silver splashes, roses and different fabrics as upper layer. They were mind-blowing, just like the show in general.

Next on the list was the show of Paul Smith (My first major show ever btw!) so I was very excited (for already two weeks or something). The venue was epic. Paul Smith took the newly renovated ‘Ecole Nationale Supérieure des Beaux Arts’ as his runway location.

Blue was the main color in the whole collection, but in general we saw every color passing. Black was less prominent of the runway, which made this show very different of Rynshu’s. Most of the pieces were classic ones, which were given a personal touch by the master himself. Long thick coats, suits, shirts, … everything crossing my eye was gorgeous. Personally, I had one favorite: a plaid grey winter coat (excellent for the winter days in Belgium at the moment). This brings us to another main theme of the collection: plaids. They were visible in both the men and women collection. We saw many plaid blazers and suits going from blue-yellow until grey-white color combinations. These ones gave it all a 90’s touch and together with the rock and roll vibe of the collection, this made an epic combo. Next to this pattern, we also saw some dotted clothing pieces and patches in all different colors. He gave us something of everything. Paul Smith definitely looks towards the future in a bright way!

After this, we still had a 4-hour trip towards home and a Monday coming veeeery close, yet we survived.

Have a nice week guys! 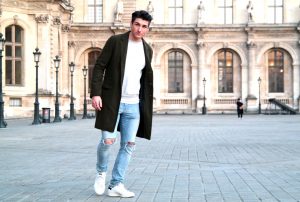